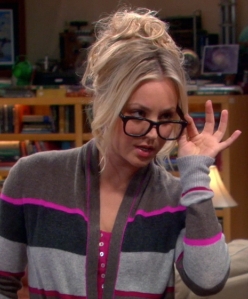 Penny snuggled into the left side of Leonard’s chest her hand reached up and took off her “Sexy Scientist Glasses”.  She handed them to Leonard.

“Put these on the night stand please sweetie”

Leonard took her glasses and set them on the night stand to his right retrieving his own and putting them back on his face.

Penny’s head disappeared below the covers then her arm appeared holding first one boot then the other dropping them on the floor.  Her head reappeared and she cuddled back into Leonard’s chest.

“Umm much more comfortable, that was amazing by the way.”

Leonard got that goofy little smile on his face, “I was inspired by my beautiful girlfriend to new heights.”

Penny smiled even though she knew he couldn’t see her face.  He would have been amazed at the smile.  It radiated happiness and fulfillment, a closeness achieved only a few times before.  The insecurity was gone she was comfortable and happy.

Penny leaned away and propped her head up on her hand so she could see Leonard’s face.  He turned and stared at her green eyes.  They were very soft right now.  Leonard thought Penny’s bedroom eyes.

“You know Leonard this was a real first tonight.”

Leonard got a puzzled but happy look on his face, “You’re not going to tell me you’ve been faking it all the other times are you? “

Penny giggled, “No, but we have kind of got back to where we used to be in bed.  It’s something else.  This is the first time you’ve ever drug me off to the bedroom to have sex.  I almost always have to initiate things.  Though a lot of the time we both know its time, you kind of took the reins tonight.  I liked it.”

Leonard sat back and stared at the ceiling for a moment.  Penny finally reached over and ran her hand down his chest.

Leonard tuned back to her, “I guess your right it’s really the first time I’ve taken the lead in the bedroom.  What do you suppose that means?”

Penny shook her head softly, “Don’t over think it Leonard, but it means were a lot more connected this time than we were before.  I have a hard time saying it but we’re in a real relationship now.  We both know it and it’s special were not just dating anymore.”

Leonard looked awestruck by what she had just said.  The smile came slowly to his face but got wider each second.

“My first real relationship.  I hope it’s my last relationship, aw not that it’s the last one I ever have but that it lasts forever because it’s with you.  I mean”

Penny moved her hand to his mouth, “I know what you meant Leonard, me too.  I want this to last and grow and get even better.  A few months ago I didn’t even know where we were at and know we’re here.  I thought I’d be panicking and scared but I’m not.”

Leonard nodded, “So what do we call this new phase of our relationship, if were not dating?”

Penny furled her eyebrows for a moment then hesitated, “I guess we just call it love”

It’s short but really only one scene, hoped you liked it.

2 thoughts on “In Focus, A Big Bang Theory one shot, single scene after the end of episode 12”