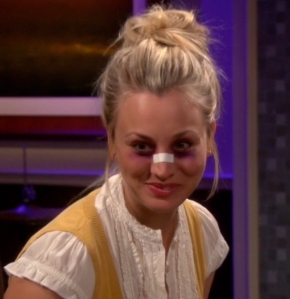 Broken Bridges (The first part of this story is in the preceding post below this one.)

Penny awoke her arm sweeping across the bed where Leonard should be.  The spot is empty.  She sat up in her pink camisole.  Penny looks over at the clock beside her bed.

Penny lay back down snuggling into the spot where Leonard had been, “He hasn’t been up long it’s still warm, hmm”

Penny lay in Leonard’s spot for several seconds before her eyes flew open. She started to get up.

Leonard fully dressed is sitting at his laptop sipping on his coffee when the door opens and Penny slips in dressed in her short pink robe and slippers.

“Hi, what are you doing up Penny?”

Leonard takes another sip of his coffee.  He has on another new shirt.  This one is purple with black horizontal strips across the chest.  His purple hoody and tan jacket is on the chair behind him.

“Hey Leonard, I just wanted to see you before you went to work today.  I wanted to warn you that things might be a little awkward with Alex today.”

Leonard looks puzzled, “You didn’t threaten her or anything right?”

Penny smirked, “Well not in so many words but I’m sure I got my point across.  I’m just saying you might be prepared for a little different approach from her.  She will either give you the cold shoulder or redouble her efforts to hit on you.”

Leonard kept from smiling, “I’m sure I can handle Alex either way.  She really is very nice, I’ll try to repair the damage and remain friends.”

Penny gave him a withering look, “Right, like you have any experience with the brush off.  Remember you tried it on me once?”

Leonard got a concerned look on his face, “Oh yeah, well I guess I’ll just have to do my best.”

Penny continued to look unconvinced, “Just be firm if she is hitting on you Leonard.”

Leonard got a wicked little grin, “Might be easier if you had said yes when I proposed?”

“It would have been easier if you had asked at an appropriate time remember what Raj said weak coffee.”

Leonard chuckled, “Weak tea actually, you know you have nothing to worry about, right?”

Penny came over and wrapped her arms around him as he sat, “I know Leonard, and you know too.  I’m just worried about you being uncomfortable and me causing it.”

Leonard kissed her for a moment, “Nothing to worry about.  What are you going to do today?”

Penny rolled her eyes, “Just hanging out this morning then I’m going to Bernadette’s later to see the wedding album.”

“Still want to go to the physics lecture tonight.”

Penny smiled, “Oh I’m in but if I fall asleep don’t wake me unless I start snoring.”

Penny turned and left the apartment. Leonard looked up to see Sheldon enter the room wearing the iron man helmet.

Leonard shook his head, “You and Howard are still fighting I see.”

Muffled by the helmet Sheldon answered, “Wait until he sees Amy’s car parked in the space this morning with my name on it.”

Leonard shook his head, “This will not end well.”

Leonard sat at the table by himself drinking his coffee.  He nervously looked toward the buffet line.  Alex came around the corner with a cup in her hand.  She smiled at Leonard and approached the table.

Leonard smiled back, “Hi Alex, its still Leonard.  Join me.”

Alex looked around as if to see if Penny was lurking.  She sat across from Leonard.

Leonard looked at her with a caring sympathetic face, “It’s okay Alex, Penny told me she had a chat with you.”

Alex raised her eyebrows in disbelief, “She scared me to death. The look on her face was malevolent Leonard.  She didn’t threaten me or anything but she was pretty clear.”

Leonard nodded, “I wish I could say her bark is worse than her bite but I’d be lying.  When Penny’s mad or in a protective mode it can be pretty intense.  But that said she’s a wonderful person and I love her very much.”

Alex nodded slowly.  Leonard went on, “Were you really hitting on me or was Penny just over reacting?”

Alex blushed and looked down, “I was hitting on you.  I kept wondering when you’d notice.”

Leonard pouted and shook his head, “It figures, I guess I’m still pretty clueless when it comes to women sometimes.”

Alex shook her head, “I don’t think you’re clueless Leonard, you’re just horribly in love with your girlfriend.  If you hadn’t been in a relationship I think you would have noticed because then you would have been looking for someone.  I didn’t know that or I wouldn’t have been testing the water.”

Leonard nodded at that, “I would probably have been awkward and botched the whole thing actually.  Well that’s all out in the open, friends?”

Leonard offered his hand across the table.  Alex took it in hers, “Friends.”

Leonard looked over at Sheldon sitting behind his desk.  Iron man helmet still on as he worked on his laptop.

“Sheldon are you going to take that thing off soon?”

Sheldon shook his head in the helmet, “You get used to it after a while.”

“I wonder what’s keeping Penny we have to get going to the lecture pretty soon.”

His phone suddenly rang.  His ring tone of Shania Twain’s Man, I feel like a Woman telling him it was Penny.  He quickly answered, “Hey Penny, where are you at?”

“What, are you alright?  What hospital.  I’ll be right down.  Oh so you’re leaving now and Bernadette will bring you home.  I’ll meet you when you get here.  No I don’t care what you look like I’ll be downstairs.”

Leonard hung up the call.  He stood up and walked over to Sheldon then pulled the helmet off his head.  Sheldon began to protest.

“Sheldon this whole thing about the parking spot has got to end.  Find a way, Amy tried to hit Bernadette with her purse tonight.  She missed and hit Penny in the face and broke her nose.  Find a way to end this where everybody saves face or so help me I’ll call your mother.”

Leonard turned and stalked out of the apartment.

Leonard sat Penny down on the couch.  Her nose had a bandage across it.  Both her eyes were black and blue.  Leonard looked at her concerned.

Penny just sat back in a snuffed up voice replied, “Thanks honey, sorry we missed the lecture.”

The three quick knocks on the door made Leonard look up.  He didn’t wait for Sheldon to finish and opened the door as Sheldon uttered, “Leonard and”

“Just come in and apologize to Penny Sheldon you can knock six more times on the way out.”

Sheldon looked at the door unsure if he should knock again or come in.  He came into the apartment with a mug in his hand.  He walked to the couch and handed it Penny.

Sheldon sat down next to Penny.  Leonard was about to speak when Sheldon started, “Soft kitty, warm kitty, little ball of fur.”

Okay that’s it all she wrote, or actually he wrote for this small little fiction to join episode 8 and episode 9.  Hope you enjoyed it.  I had blast.  Now back to Hiatus and a little reading time.