This story takes place after Penny finally tells Leonard she loves him. 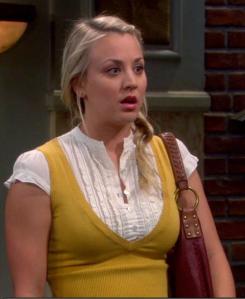 (I used to disclaim everything, but it got kind of old and I got a rash, so you know the drill)

Leonard dropped his bag into his chair then reached up to wipe the tears from behind his glasses.  He moved to the end of the couch taking a seat then removed his glasses.  Leonard retrieved a cloth from his pocket and started to wipe his glasses.

“Penny loves me, she really loves me.”

He slid the glasses back onto his nose then sat back into the couch.  A smile spread across his face then turned slowly into a look of consternation.

“I wonder why she never said it before.  She’s right I did know she loved me but I just wouldn’t let it sink in.  If she loves me it doesn’t matter how tall I am.  It doesn’t matter that I have asthma and allergies.  That I’m king of the nerds and awkward in a lot of social situations.”

Leonard took his phone out of his pocket.  He was tempted to text ‘I love you’ to Penny but then thought better of it.  She was right he needed to not make a big deal about it.  Leonard knew he would go over the top too quickly.  It had happened to them before.  Things would happen and he would try to move to fast.  Then it would be back to weird again.  He had to play it cool this time.  Don’t make a big deal out of this just like she said.

Leonard couldn’t turn off his emotions.  He was excited and still teary.  He wanted to hear her say those words again when she wasn’t mad at him.  Then be able to hold her close and say them back to her.  Why was their relationship so weird?

It hit him then that what was weird in their relationship was that they were opposites.  He didn’t guard his emotions.  He let his mouth just spurt out what he was thinking.  Penny was the opposite, she thought about everything she said.  If she hadn’t been mad tonight she probably still wouldn’t have said it.  She did show how she felt though.  They spent a lot of time together.  She had started coming to his lab every week just to see him.  They ate together and she was starting to trust him.

He did trust Penny.  He knew better looking and taller guys hit on her all the time.  Leonard had also seen her shut those guys down.  Sometimes simply by introducing him as her boyfriend or suddenly holding his hand or putting an arm around him.  She never showed she was embarrassed to be with him even when he thought she should be.

“How can I be so stupid sometimes?  Why haven’t I noticed any of this earlier?”

Leonard shook his head, “It’s because I’m insecure and I think she deserves better than me.”

“Who deserves better than you?”

Sheldon had walked through the door he closed it behind him.

“I certainly do.  Do you know Alex kept asking questions about you the entire time she drove me home.  You are much quieter. I may have to get a new assistant.’

Leonard looked over at him, “I think Alex is very sweet to drive you home.  Most assistants would draw the line at being your driver.”

Sheldon walked to his desk then sat down, “So who deserves better than you?”

Leonard got a solemn look on his face, “Penny does”

Sheldon snickered, “Really Leonard, you should think it through.  You deserve each other.  You both have huge flaws in your character.  She fills your flaws rather nicely and you hers.  Though this sounds like a cliché she completes you.”

Leonard sat back for second.  Sheldon was right.  How did that happen?  How could Sheldon Cooper be right about a relationship issue?

“How did you come up with that Sheldon?”

Sheldon was typing on his laptop now, “Oh all the classical romances I’ve seen are like that.  Han Solo and Princess Leia, Superman and Lois Lane, Spiderman and Gwen.”

Leonard almost laughed sci-fi and comic books were Sheldon’s resource material.  He looked at his watch then over at Sheldon.

Sheldon looked over at him, “Should we go out for Chinese tonight or Thai food?”

Leonard had put the emphasis on the word love.  Sheldon looked at him puzzled for a second, “Is you mother in town?”

This little one shot was inspired by Nicole’s (WeBuiltThePyramids) story Expression.  Think of it as prequel if you like.  So zip over and read that story to see what happens when Penny comes home from work.  Thank you Nicole for Expression and all your wonderful work.

Link to Expression on Fanfiction.com